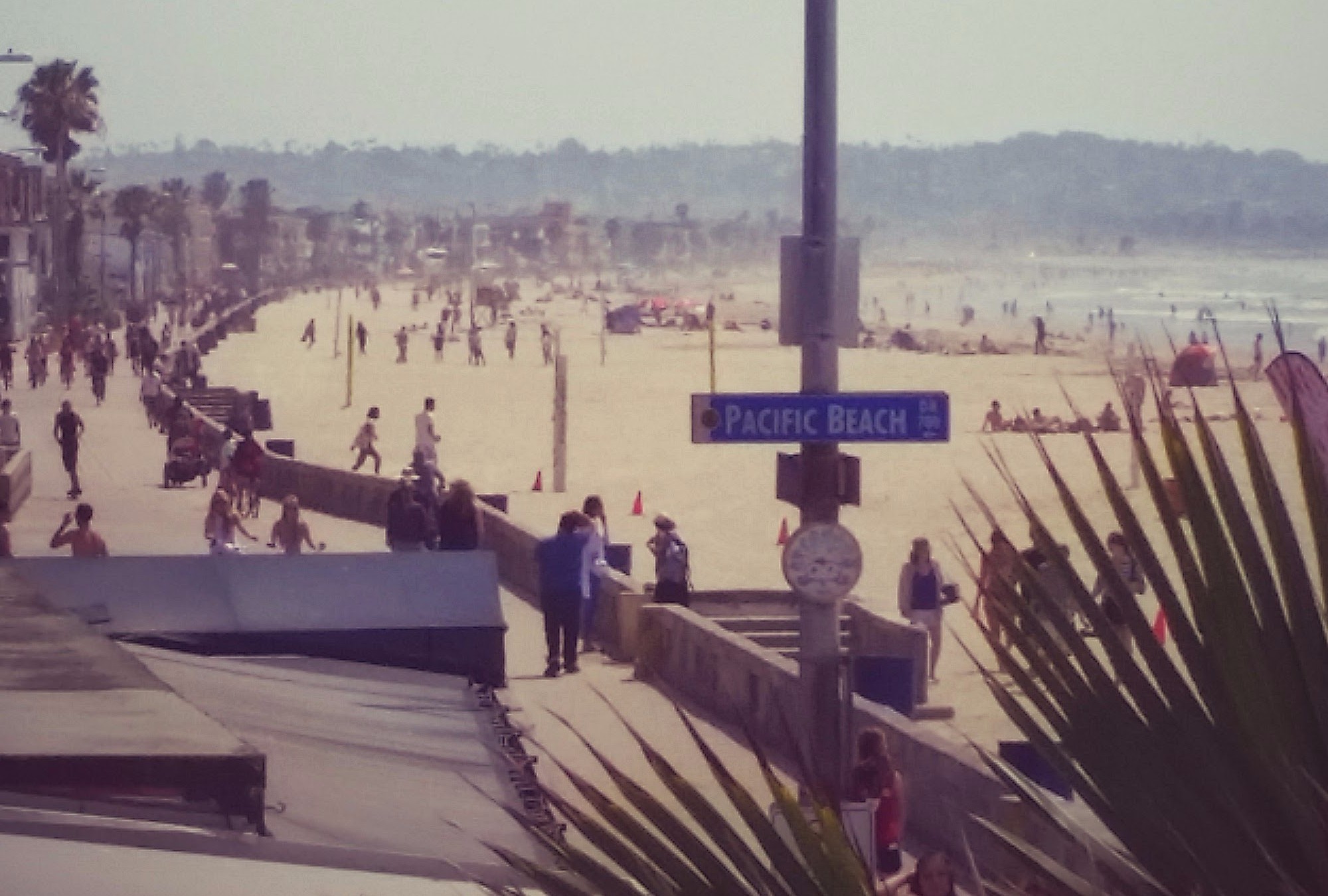 Kean*, my young surfing instructor, says perfect things like this as he pushes me on my surfboard from behind, propelling me forward toward the shore. I couldn’t have dreamt up a better surfing instructor if I tried: Kean was bleach blond, tan, and lean, confident but not cocky, personable, and perhaps (somewhat tragically for my self-esteem) nearly young enough to be my son. Plus, you really want your surfing instructor to use phrases like “gnarly wave” during your lesson.

“Paddle, paddle, paddle!” he shouts. I start paddling with cupped hands, just like he taught me on the sand. I can hear the roar of the waves behind me gathering speed; I glance back and see the foam creeping up. I can’t see Kean guiding my board at its tail, but as I turn back to face the front, I hear him shout again: “Up! Up! Up!”

I do a lightning-fast yogi up-dog and pop into my best surfer-girl stance. I try to remember everything I’ve learned in the last hour:

Don’t look down at the board.
Land with your feet on the middle stripe.
Don’t stick your butt out too far or you’ll fall over.

“Look at the shore!” Kean shouts. Dammit, I think to myself, you’re looking at the board! I glance up at the shore and immediately feel lighter.

“Front foot! Front foot!” I do my best to press my left foot on the front half of the board down. Just like Kean promised, every time I do, it feels like I’m stepping on the gas pedal of my surfboard. I wobble with the extra speed, but I’m up. I’m up…I’m up!

I’M UP. I’M SURFING. I’M STANDING ON A BOARD ON TOP OF THE WATER.

I glide past another instructor in the water giving a lesson to a small boy. As I do, he yells out, “Yeah girl. Yeaaaaah!”

And it feels like I’m flying. Or like I’m swimming really well (which I can’t even remotely do). It feels like freedom and peace and glory and life coursing through my cells. I am absolutely terrified – and I love it.

I’m not sure exactly what prompted me to look up surfing lessons during my Route 1 Pacific Coast Highway road trip that ended in San Diego – probably an adventurer guidebook suggestion – but nonetheless, I foolheartedly mentioned my search for surfing lessons on my facebook profile and the rest is history: I had to take the lesson to not lose face.

Make no mistake: I am not athletic or adventurous in the slightest, and am one of the worst swimmers you’ll ever encounter. It’s not for lack of trying through: my mother dutifully enrolled me in swimming lessons for years as a kid. As in multiple years. Many. Several. I disliked every minute. I could never get the breathing right, and would exhaust myself in a front crawl, thrashing around for what felt like 10 minutes to find that I’d only crossed a third of the pool. I even tried adult swimming lessons in my 20s in hopes of doing a triathlon, but found that it was no easier as an adult. I like floating around on my back and doing somersaults in the shallow end, but beyond that, swimming isn’t really my thing. But I was assured by the folks at P.B. Surf School at Pacific Beach that being a prime swimmer isn’t crucial to surfing. Well, good, I thought. But what was crucial to surfing?

As we walked from the board shop to the shore, (actually, as I awkwardly dragged my board through the sand and Kean jauntily toted his), Kean tried to help me find some skills that would translate to surfing:

“So do you do anything in the water like water skiing or wakeboarding?”

“What about anything on land – regular skiing? Snowboarding?”

Right about then, I bet Kean wanted to ask: So, the ocean, are you familiar with that? Have you ever been in any kind of natural water before in your life? Do you know that thing you’re dropping every five steps is a surfboard? (Seriously, I was a comedy routine with that surfboard. I fell down, dropped it, banged it against my knees. It was physical comedy at its finest.)

I had absolutely no clue what surfing involved – other than standing on a board in the water – nor did I have any comparable skills to help me with it. (I also was pretty sure I’d get eaten by a shark or drift out in the ocean and die a salty horrible death.) But dear God, I’d posted on social media that I was going surfing, and pride would keep me from breaking that promise.

The truth was that I was happy my friends and family had pushed me, with their exclamation points and thumbs up, to try it. And even though I really, really wanted to tell Kean – as we began walking out into the ocean for my first attempt at getting on the board – that I had changed my mind, that I was beyond terrified, that I really just wanted to sit on the sand with a margarita and a sun hat, I didn’t. I was gonna do this, dammit, and I was (hopefully) not gonna die.

Kean patted the board, “Hop on. Belly on the board.” Oh good. I get to lie down. This was promising. I gripped the sides of the board and slid on. Kean moved to the back of the board and gripped my ankles to pull me down to the back edge, and then pushed the board out, away from the shore. We moved through two waves like this, crashing into oncoming waves, the board (and me) getting jostled, the smell and taste of salt covering me. Can we stop here? I thought. This is enough. This is enough. But as the third wave approached, Kean spun the board around and we began the first of many “paddle-paddle-up-up” attempts that led to that gnarly wave.

At the end of my 90-minutes (during which I had to take a break because, really, talk about motion sickness), I found that I wasn’t the best surfer ever, I don’t have amazing natural instincts or ability – but I stood on the board for a few seconds several times – and perhaps obvious at this point, I didn’t die or get swept out to sea.

But the most important part: even though I was terrified, I was also thrilled. The kind of thrilled that makes you feel your aliveness. That makes you tingle. That makes you smile without effort. That makes you glow. I didn’t once think about that thing I wish I hadn’t said or done last week or last year, nor did I think about tomorrow or what I’d have for dinner or where my life will be in five years. It didn’t matter that I’m the most ungraceful creature ever while walking with a surfboard, that I stood for only a handful of seconds, that I fell about 150 times. What mattered was that I was simply NOW. That surfboard and I (and well, Kean, too) were the only things in my world. Those now feelings are like therapy when you’ve been living in the past and future too much – which we all do now and then.

And I search for them all the time.

What are your “now” moments?

More about P.B. Surf Shop: Around since 1962, P.B. Surf Shop is one of the few surf schools with a brick-and-mortar building on Pacific Beach. Private lessons (which are the only way to go for newbies – and will pretty much be the only option for solo travelers) are $85 for a 90-minute lesson (as of April 2015), which includes everything, such as wetsuit and board rental. This price is standard for the area, so don’t waste time trying to save a buck. I first visited another surf school with a high search engine result but less than stellar customer service, and opted not to spend my money there. I asked two other businesses along Mission Boulevard where I could take lessons and both directed me to P.B. Surf Shop – and I’m glad I followed their advice. My experience from beginning to end was stellar, and I wouldn’t hesitate to visit them again.

*You guessed it – not his real name.